Climate Change: A Shift in the Conversation

The Vietnamese people have always had a close relationship with nature. Many of their cultural symbols incorporate nature and agriculture is still a large part of the culture.

Bronze drums are very important as they’re symbols of authority and hold religious significance. These drums differ in shape and pattern. Concentric circles on a drum represents unity and communication between people and nature.

Climate change is complicating the conversation between people and their environment. 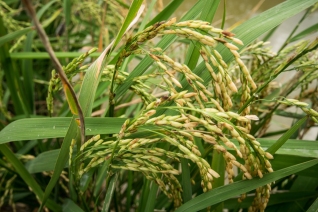 Rice, another cultural symbol representing humans conquering nature, is now conquering humans. Saline intrusion due to sea level rise is making it harder to raise rice crops which require fresh water to thrive. Rice is a staple food in the Vietnamese diet and makes up almost half of what I have been eating since arriving in Vietnam.

The Vietnamese people are slowly learning to recognize what is happening. According to Dr. Vo Quoc Tuan, an understanding of climate change has grown from less than 20% in 2008 to about 70% during the most recent survey in 2017. Although an understanding of climate change is spreading it’s still often far from the mind because as Dr. Le Khuong Ninh, an economist at Can Tho University said, the Vietnamese in the Mekong Delta live an “easy life” with fertile soil and an abundance of fauna, but this is beginning to change.

Ms. Nhi Thoi with Change Vietnam said that identifying the effects of climate change as such is an important step in trying to combat the cause of the problem. People need to understand the impacts they are seeing are caused by human actions and aren’t simply natural occurrences. Only until people recognize that fact can we attempt mitigation strategies. Nhi said that the Vietnamese government is much more open to adaptation attempts rather than mitigation. Although Vietnam is facing a large portion of the effects from a hotter climate, rising sea levels, and changing rain fall patterns it has contributed very little to greenhouse gas emissions. It might be hard to see change when attempting to inspire a nation at an NGO which is strictly regulated by the Vietnamese government, but when visiting with farmers and speaking to professors a shift in attitudes can be seen. Most of the climate change work is happening on the provincial level. Action plans have been created, climate change is beginning to be integrated into development plans, pilot projects are taking place, and climate change workshops are in place to educate the community. 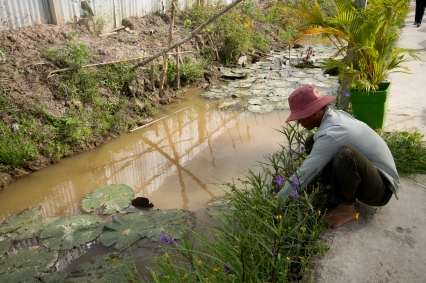 Agricultural shifts are the biggest adaptation we have seen while being in Vietnam. Farmers are shifting from intensive mono cropping which promotes disease and is high risk economically to extensive crops that alternate throughout the year. A few days ago in Bac Lieu we met a farmer who alternated rice and shrimp crops. Rice is planted during the rainy season when there is plenty of fresh water. During the dry season the dikes are opened to allow in brackish, saline water to grow shrimp. This shift in farming is an adaptation to the rising water levels and changing rain patterns are responsible for the saline intrusion. The farmer learned about this method of farming from informational pamphlets around town and advertisements that the government runs on TV. The region and province have training courses to show farmers how to switch and Can Tho University offers some training courses as well. Dr. Hai, with Can Tho University, said there are at least two stories on climate change on TV every week which is more than you see in the US.

Climate change is an issue that Vietnam cannot ignore and the Vietnamese are learning that as well. Their conversations with the land are changing and adapting to a new climate. In the United States we might take a cue from the Vietnamese and start up a conversation with our natural environment.

This entry was posted on January 13, 2018 by University of Montana - Vietnam Study Abroad. It was filed under Vietnam 2018 .