During my stay in Vietnam I met a great deal of people who I came to adore, and even love, but there were few who made such an impression on me. Tai, a malaria survivor, soon-to-be father of three, and nature guide in Cat Tien National Park, was one of those people.

From the moment we hiked in to Crocodile Lake, until the moment that we were dropped back off at Cat Tien National Park Headquarters, Tai was there to watch over us. Throughout our three-day trip to Crocodile Lake, Tai, with his trained eyes was there to point out and name all the birds, primates and other creatures that we wouldn’t have noticed with our untrained eyes. 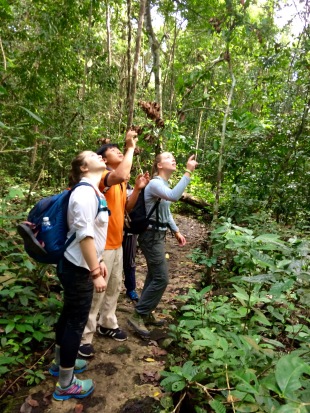 Tai’s job as a nature guide in the jungles of Cat Tien fits his personality remarkably well: He is a man of few words, choosing to observe everything and everyone around him, rather than talking. Without his stoic demeanor, observant eyes, and humble attitude, he wouldn’t be excellent guide that we came to know.

During our trip, I came to realize just how much Tai loved the jungle and the creatures that inhabit it. When we were packing up to leave on our last day at Crocodile Lake, I asked him what led him to spend his life as a nature guide, he simply stated, “The forest”. From the few short days that I spent with Tai, I could tell that his love for nature and wildlife far outweighs his love for people, as he seems to search for solitude outside, rather than choosing to spend time with large groups of people. Who could choose to spend their lives leading people on overnight trips deep into the jungles of Vietnam if they didn’t love the quietness that nature provides in the way that he does.