Shrimp Farming on the Delta 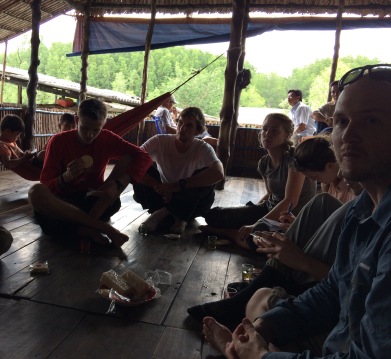 We spent the afternoon at a local shrimp farmer’s homestead within the Can Gio mangrove forest reserve, which was very informative and exciting at the same time. Having him open up with us concerning his daily operations was a special thing. He is considered to be a leader in a network of other local shrimp farmers, making him responsible for the surrounding water ways, which means he’s also responsible for his neighbors. The farmer told us that he would visit a different person in his collective group each day to check on them or to see if there was any help needed from him. Here, there is little room for expansion of the shrimping business.

As a forest protector within the Can Gio Biosphere Reserve, this farmer has responsibility for an entire tributary off the main river, which he had converted into a small-scale shrimp farm. When high tide comes, he opens his gates, allowing for a flood of aquatic life to enter his farm/pond. When low tide arrives, and the flow of the water goes out to the main river, he just closes his dikes to prevent his catch from escaping to back into the channel.

The farmer explained that he would catch a range of products, from different kinds of fish to the all mighty shrimp. When he was satisfied with what he had in his pond, he would open the gates at low tide allowing the water to rush back out to the main branch of the river. To harvest the marine life in his pond, he would lay nets across the opening, catching the fish and shrimp as they tried to escape with the outgoing water. At this point he could monitor closely the amount of life caught in his pond.

Shrimp farming within the mangrove forest is a lucrative business, if you know how to do it properly. Shrimp get a high price at the market, which provides for a relatively high standard of living.

For this farmer, it meant earning up to $300 per month. Shrimp farming here also means, however, that you are living far away from the city and all of its accommodations. You are having to commute everywhere you go, and this is almost always by boat.
The shrimp farmer we had the opportunity to meet knew his trade well, to the point that he was helping others. He was highly successful man and he opened his house to our group. It was a truly meaningful experience that I personally won’t forget. He fed us a huge home cooked meal, which meant a lot due to their financial situation. Feeding a group of large Americans wasn’t an easy thing to do or a cheap thing to do by any means, even if most of the food we ate was grown locally. We were shown a side of the Vietnamese people by sharing his home, culture, and traditional food with us. All of us sitting on the ground eating and talking together and sharing in conversation was a rare and special moment. The amount of kindness and openness to our group I’m sure won’t be forgotten. I certainly know I won’t forget the day that we spent with a shrimp farmer. 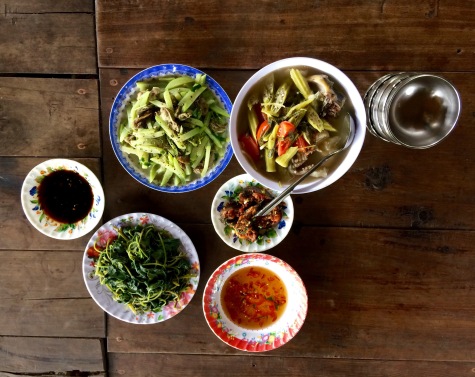 This entry was posted on January 5, 2017 by University of Montana - Vietnam Study Abroad. It was filed under Vietnam 2017 .