As Vietnam has moved into free market capitalism it has become more connected with the western world, which has strongly influenced fashion trends in the country. In the larger cities that we traveled to like Ho Chi Minh City and Can Tho, many young women wore skinny jeans, crop tops, high waisted short shorts, and designer brands. However the county remains under communist rule and strongly tied to the past and tradition and that continues to be displayed in much of the clothing worn by women such as the traditional áo dài outfits.

One thing that strongly influences what a Vietnamese woman wears is the pressure to maintain pale skin. Most of the women dress very modestly, even the young students. For a person with lighter skin is one of wealth and class and a person with a darker skin tone generally is exposed more to the sun from doing hard labor out of doors and a person who does that is low class and poor. Once I discovered this I understood why everyone was so covered up in such hot weather. 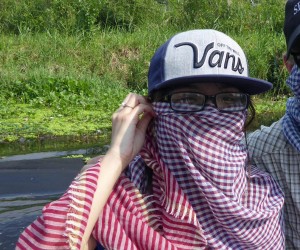 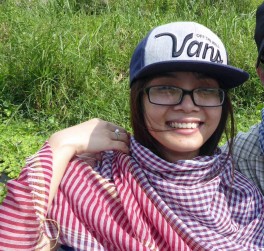 However not everyone is so modest. In Ho Chi Minh City many teenage and twenty-something girls were not concerned with traditional pressures and were much more in tune with American trends. It was common to see shorts, tank tops, torn jeans, and just more skin in general than anywhere else we went. In Can Tho the girls were still aware of Western trends but they tended to take from the more modest preppy trends of skinny jeans and button up blouses, for coverage and paleness is still important to them. However these outfits are probably the least practical considering the hot and humid climate. 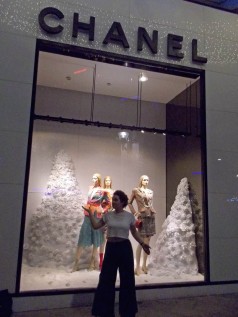 Young women’s outfits are clearly inspired by what can be found in magazines and what is worn by American celebrities their age. There is 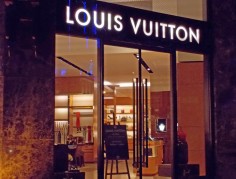 also a very strong obsession with designer names like Burberry, Chanel, Ralph Lauren, and Louis Vuitton. They even have facemasks that are knock offs of these brands. In order to prove wealth and class they show off every designer they can. The most popular trends I found were prep, hipster and classic. Prep was worn the most by both genders and across most ages. Hipster inspired outfits can be seen almost exclusively on teens and twenty somethings, while the classic, Chanel style was mostly seen on wealthy middle aged and older women. 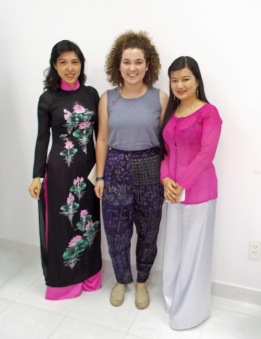 The most formal and traditional women’s wear is the áo dài outfit. It consists of a long, silk tunic that is tight fitting around the bodice and has slits up the sides to the waist and goes over long loose fitting silk pants. It is mostly seen being worn by service women and

not by the everyday pedestrian. Many waitresses, hotel desk clerks, and airport service agents wear the áo dài. It is considered formal wear, very flattering for the small waisted petite frames that so many Vietnamese women have. It is also very functional for the hot and humid climate, for it allows for much air flow while being protected by the sun.

The less formal version of the áo dài is a silk pajama like outfit. The top and bottoms are generally very simple and made of the same patterned and brightly colored fabric. They are certainly the 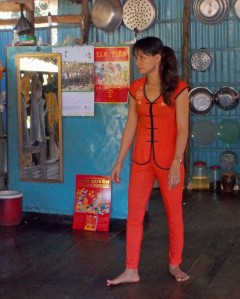 most practical of the outfits I saw for the loose fitting silk allows for coolness and comfort and the style still provides protection from the sun. These pajama outfits are sported by women in the cities and rural areas. However few young women wore them and instead stuck to the trendier and westernized wears previously mentioned.

I was very inspired by the colors, patterns and designs of the more traditional fashions worn by the Vietnamese and I hope that the trend setters do not allow them to fade out completely in their desire to become more developed and westernized. For I found a lot of elegance and beauty in the áo dài, with it’s long lines and flow. Even pajama outfits were exciting in their happy colors and interesting patterns. Though they were very mainstream style, each woman put her own spin on them with a little jacket of contrasting fabric or some crocheted lace around the collar. I think American fashion could certainly benefit from adopting some of the more modest and form-flattering trends that are so popular in Vietnam as well as the bright beautiful patterns. 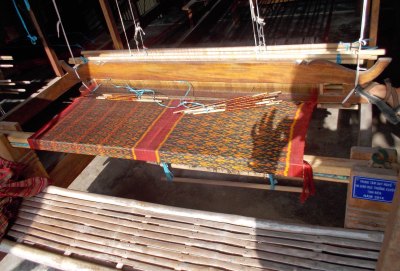 Traditional Khmer Weaving on a Loom

This entry was posted on February 4, 2016 by Dan Spencer. It was filed under Uncategorized .