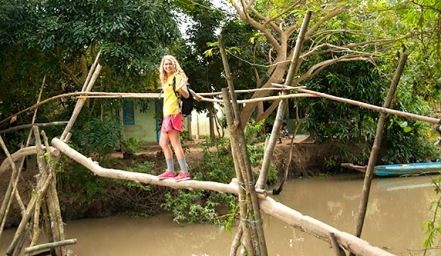 Throughout my travels in the enchanting country of Vietnam, a definite constant is the people’s fascination with Americans. No matter where we go, people look, especially the children. When traveling in the Phu Tan commune, Soc Trang Province we had a crowd of children watching us, their eyes alight with curiosity. When asked for a picture, the children would smile big, waiting expectantly. The children here are fearless. They will jump onto a motor scooter, run across a monkey bridge, and explore and play on their own at a very young age. The monkey bridges are pieces of wood tied together with twine and lead unsteadily across a river. The children are so comfortable in their own little world. I saw a child of around eight years old biking around his little sister that was only one year old. 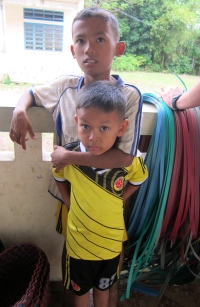 The brother cared for his sister in way that seemed as if he had cared for her every day since she was born. The children in these small villages grow up unsheltered from the world.

The once impoverished village in Soc Trang where the children live has the International Heifer program helping the townspeople develop a steady income and food supply. The Heifer program builds up poverty-stricken communities by giving them livestock The village of Phu Tan is only an hour outside of Can Tho, yet there is a whole new cultural background and language. The Khmer people live in this village and speak their own language.

We needed translators that spoke English, Vietnamese and Khmer. The Khmer live a life of simplicity and opened up their homes to show us their crops, how they make rice, how to weave baskets and showed us their cattle. When a new cow is born, it is given to another family in need somewhere in the community. Getting the chance to visit this community and see how Heifer International has helped them was a humbling experience that won’t be forgotten. 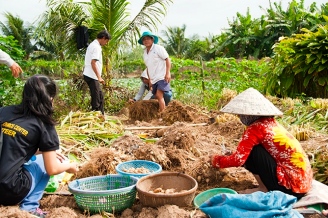 The locals have a way of work that almost mimic an art. When beating the rice, the women do so in a steady beat without falter. The beating sounds like music. When cutting the potatoes out of the bushels there is a tedious pattern and skill that has been passed down through the generations. The sound of the bamboo swaying in the wind even sounds like music that would be equivalent to the patter of rain on a roof. The culture in the small village is rich and the traditions strong.

It is intriguing that such a timeless village with such a rich culture has a modern convenience of a TV. A one bedroomed shack will have a TV, if not anything else. The modern world has certainly reached many parts of the world in ways I would not have expected. Out of all the wonderful, helpful technologies there are in the world, the TV seems the most widespread. When visiting these homes I happened to glance over and see that Reese Witherspoon was on the TV. Perhaps the fascination with the Americans is correlated with the spread of the TV.

This entry was posted on January 18, 2015 by University of Montana - Vietnam Study Abroad. It was filed under Vietnam 2015 .