Aquaculture and Fisheries in the Mekong Delta

“Aquaculture and Fisheries in the Mekong Delta” by Rennie Winkelman

There are over two hundred bones in the human body, but none are as important as the backbone. Your backbone provides support for the rest of your body and protection for your livelihood.

Agriculture and aquaculture make up the backbone of Vietnam. They provide economic security and support and are an integral part of the country’s culture. As sea level rise and saltwater intrusion into  farmlands become more prolific, agriculture is being threatened, jeopardizing the livelihood of the entire country.

Therefore, the Vietnamese are turning to aquaculture as a way to subsidize their incomes. The amount of shrimp farming has increased throughout the nation, and shrimp has become Vietnam’s fourth most valuable export.

Intensive shrimp farming, however, can be harmful to the environment. Farmers have to use chemicals to maintain water quality and clear large swaths of land for shrimp ponds. This high intensity, artificial style of farming produces a lot more product for the market, but the government has placed limits on the number of farmers who can use this high yield method. More natural, integrated systems of shrimp farming are much more sustainable. 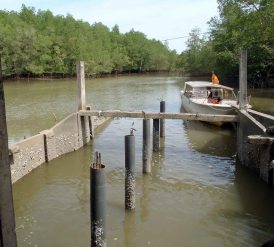 Most shrimp farmers use a lower yield, integrated system with rice paddies or mangrove forests. We visited two different farmers who use an integrated mangrove-shrimp farming system. They use a system of dikes, water gates, and nets, coordinated with the lunar cycle. At high tide they let brackish water in through the gates, and juvenile shrimp swim into the mangrove pond.

The shrimp mature in the mangroves. At low tide the farmers open the gates and the water rushes back out towards the ocean. The mature shrimp are attracted to the higher salinity so they swim out through the gates and into the nets. The juvenile shrimp in the mangroves prefer the less saline environment so they do not swim out into the nets until they are mature enough to sell at the market. This repeats every two weeks as the lunar cycle hits the full moon and new moon.

It is a very effective system; the first farmer we visited said that he could make up to ten million Vietnamese dong each day in the market. In the integrated rice-shrimp system they raise rice in the rainy season when there is fresh water in the fields and raise shrimp in the dry season when they open the dikes and allow salt water in. Most farmers can raise one rice crop and two shrimp harvests in one year.

These more sustainable methods are much better for the environment, and they are still an economically viable way to support a family. As the climate continues to change, it is important to educate farmers about methods like these integrated farming systems, so they can adapt to new problems that arise and not contribute much to those problems themselves.

Sea level and saltwater intrusion are still increasing, and if farmers do not know about the problems or how to adapt they may lose their way of living or make the environment worse than it already is. Integrated aquaculture strategies give farmers a low risk, more sustainable way to increase their income, as well as being better for the natural environment. It is a win-win situation.

This entry was posted on January 14, 2013 by University of Montana - Vietnam Study Abroad. It was filed under Vietnam 2013 .