Pointing Things Out by Ben Simonson

Anyone arriving to their hotel room after a 24 hour plane ride from the United States to Vietnam would want to shower, change clothes, and brush their teeth. Unfortunately, I could not do most of the above because my luggage was delayed in transit. Two days later, our contact at the University of Can Tho told me she had found my bag and that it would arrive in one day. The thought that I would never see my precious belongings immediately left and was replaced with a feeling of pure joy that manifested into a pointed finger aimed directly at her face followed by an ecstatic shout of thank you. In the U.S., this gesture would likely be reciprocated with a high five, or a feeling of satisfaction from the recipient of the point. Instead of a high five, the reaction was a shocked, backwards movement similar to a jump, as if to dodge a slap. It all happened very quickly. Through further investigation I learned that it is rude to deliberately point at someone above the chest. Even if your feelings and motivations for pointing are positive. To ensure a cultural miscommunication like this didn’t happen again, I asked around and did some research on what not to do. Very fascinating indeed. 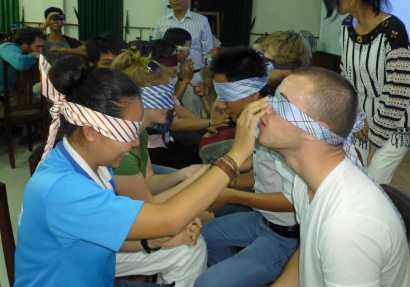 On New Year’s Eve, we went into the heart of Ho Chi Minh City to watch the ball drop. The streets were packed shoulder to shoulder with young Vietnamese who were similarly looking to have a good time. How we were treated, though, was truly amazing in how it was as if we had walked off the red carpet.

People made an effort to give us high fives and say “Chúc mừng năm mới,” which translates to “Happy New Year!” The hospitality didn’t stop there either. In Ca Mau, which is a small city of roughly 700,000 people near the Southern point of Vietnam people were simply amazed to see us. One night, while walking around Ca Mau, we were invited to a wedding reception. 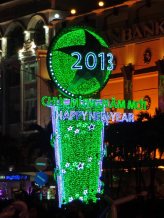 They were ecstatic to say the least as they fed us drinks and gave us hugs. Why the Vietnamese treat us the way we do, especially in the relatively recent aftermath of the American war is what I am surprised about. I asked this question to my host dad who quickly dismissed the question by saying “we forget about it.” That statement spoke a thousand words, and I took it as advice, but was not completely satisfied. Likely, it is the social philosophy of “face” that directs the Vietnamese culture into such humble interactions, and likely, I will never really understand it.

The concept of face is held in high regard in Vietnamese custom. Face refers to how you come across to others. Ideally, you want to carry a “big face,” while at the same time avoid taking face from others.

Face is taken by getting angry at someone or shaming someone. It can be described as the tail between the legs or the cold shoulder feeling as we call it in the U.S., and should be avoided at all costs. The Vietnamese are very nice people, likely because of how the concept of face governs interactions between each other.

Throughout my experience in Vietnam, I have yet to witness any animosity towards each other, even in the market, where many vendors sell the exact same piece of fruit within 20 meters of one another. The Vietnamese people are some of the nicest people I have experienced, and I attribute their collective kindness to the concept of face as a social philosophy.

In Vietnam, it is very common to see three generations living under the same roof with the husband being the head of the household. The duty of the grandparents is to educate the children while the parents make money to support the children and grandparents. During the home stay, the head of the household’s father was the only grandparent present. He spoke no English, but the strong relationship to their only daughter was apparent. This way of organizing the family is strange to me, but I could see how it would be a healthy way to raise children; constant input from two generations.

Throughout my 12 days here so far, Vietnam has proven to be a culturally charged country. Coming from the U.S. causes quite a culture shock, but the initial feeling of offense is soon muffled by the benevolent nature of the Vietnamese.

This entry was posted on January 13, 2013 by University of Montana - Vietnam Study Abroad. It was filed under Vietnam 2013 .