Responding to Climate Change in the Mekong Delta

Responding to Climate Change in the Mekong Delta by Rebecca Singleton

Climate change is a reality for the Mekong delta. The Mekong River Delta is the perhaps the most vulnerable delta for climate change in the world. Year round this region faces problems like flooding during the rainy season, saline intrusion from the East Sea, sea level rise (SLR), and increasingly harsh storms and typhoons. Because people living in the Mekong Delta are already starting to see the changes that climate change bring, a growing concern for climate change and adaptation is present.

Already over the past 50 year the annual average temperature of Vietnam has increased by .5 degrees Celsius.  Most of the local people here do not know the science of climate change; they just know that things are changing and they must adapt or leave. The East Sea, for example, has experienced SLR of 4.7 mm per year from 1993-2004. A 2.9 mm/year rise has also occurred along the costal area of Vietnam.

SLR is caused by ocean warming and increasing greenhouse gas emissions. This is such a big problem in the Mekong Delta because it will add to the already intense flooding the area faces during the rainy season. About 70% of the Mekong Delta is predicted to be flooded annually thus threatening the agriculture that most people in this area rely on. In addition to the problems it will bring to agriculture SLR will also pose problems for things like building construction and transportation infrastructure. But perhaps most importantly SLR will cause salinity intrusion.

Salinity intrusion is very dangerous to the region because it will affect the rice crops that so many people living here depend on.

This has become such a big problem that the government has put in place salinity control systems. These control systems are a network of dikes and gates that drain water in the flood season. These gates are closed in the dry season and open in the wet season at the second rice harvest. This is because during the dry season there is less upstream flow there is an increase in saline intrusion. These gates and dykes are close during this time to prevent a flux of salinity in the dry season.

Several farmers in the delta have begun experimenting with different rice varieties to find one that is more tolerant to submersion and salinity. They have also been experimenting with shifting the cropping calendar and switching to different crops. Some tolerant varieties of rice have been used but farmers are reluctant to use them because they take longer to grow and the quality is not as good. As salinity becomes more of a problem some farmers are beginning to think about switching over to farming shrimp. 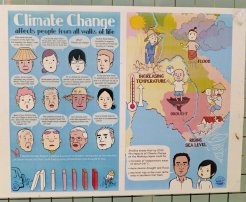 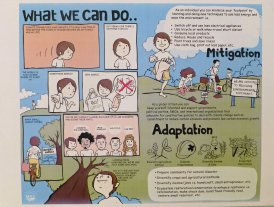 things like structural measures, migration, and mitigation. Some structural measures have to be taken in order for farmers to survive climate change. Examples of these measures include building gates and dikes, pumping stations, and water storage. If people living in the Mekong are unable to adapt to these changes, they will have to migrate to areas of higher land that will not be affected as harshly by SLR. One of the most important things people can do to attempt to combat climate change is mitigation. Mitigation in the Mekong can be accomplished by implementing water management to reduce green house gas emissions from rice fields. 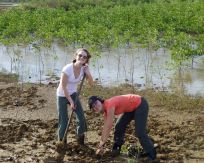 Over the next 50 years the Mekong Delta

will face many problems brought on by climate change. The farmers that make up 76% of the population here will be heavily affected and if they cannot adapt to the changing world around them they will be forced to leave. Climate change is a problem for everyone however. We must all do what we can to help lessen the effects of climate change. It is important for everyone to be environmentally conscious and help those who will be hit the hardest.

This entry was posted on January 7, 2013 by University of Montana - Vietnam Study Abroad. It was filed under Vietnam 2013 .