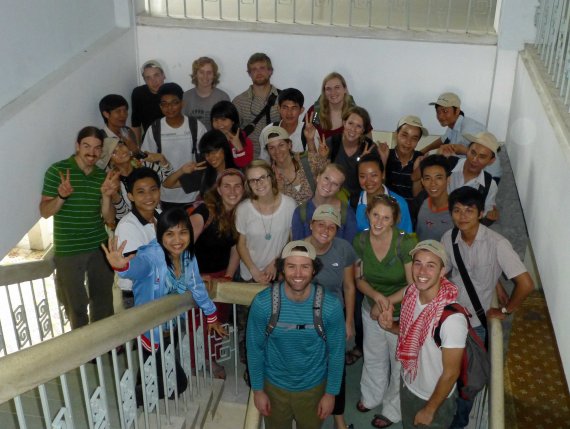 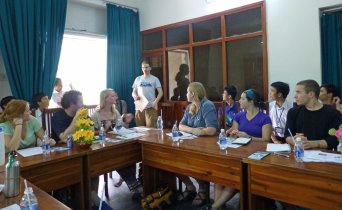 spark various kinds of change on our campus, in Missoula, at the state level, nationally or even internationally.  We employ a huge range of tactics and collaborate with a wide range of organizations working towards similar ends.  For me personally, the scale of many of the problems we are working to address is so large

that I am constantly looking to share ideas about how to proceed and to find evidence that my fellow group members and I are not the only people who care about the issue and are not the only ones working to address it.  As a student, I am particularly interested in the thoughts and efforts of other students, especially those who, like me, participate in student groups with the purpose of addressing the environmental and social issues of our time.

With this in mind, I was anticipating meeting with the 350.org group at Nong Lam University in Ho Chi Minh City (http://www.350.org/en/node/27549).  Dan had met with them the prior year and returned with a picture of about 20 group members in matching shirts.  When we met the students at Nong Lam, though, only one was wearing the 350.org shirt.

One of the other students spoke about the environmental activities of the university, including the participation of 1000 students in Earth Hour (http://www.earthhour.org/), a waste recycling day in 2012 including teaching about the three ‘t’s (Tiết giảm – Tái sử dụng – Tái chế or Reduce – Reuse – Recycle), and planting trees in the mangrove preserve we visited, Can Gio.

After the formal presentations, we took a walk around the campus and I was able to chat with the lone 350.org shirt wearer.  As it turned out, the group was no longer in existence because it had lost the university’s support and funding due to the presence of two other department (Environment and Forestry) sponsored environmental groups operating on the campus.  I found this limitation to be particularly interesting given that it sometimes seems that our campus has an environmental or social action group for every student who cares to participate in one, each with a slightly different focus but all with the same general aim: creating and preserving a livable future. 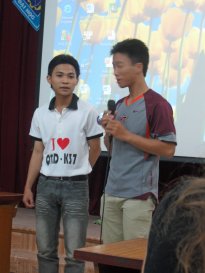 At Can Tho University we met with another group of students.  The president of the environmental club, a business student, told us a bit about the work the club does.  They were focused on cleaning up the campus and educating the students about the amount of trash on campus so they would take care of the land and not litter.  The club was also working on a larger project to clean up trash from the river running through Can Tho.

The most valuable conversation I had was with a biotechnology student who had a very thoughtful take on the effectiveness of the environmental club.  She said it was a very small group, composed largely of students outside the environmental major who just cared about the environment.

She suggested the club should work to recruit members from the environment department in order to benefit from their greater knowledge from their studies as well as the greater degree of authority their membership would confer on the group.  The participation of environmental studies students would also help gain further support from the university and possibly also more funds which would help them pursue bigger projects and recruit more members from diverse programs across the university and get the word out about their group and the work they are doing. 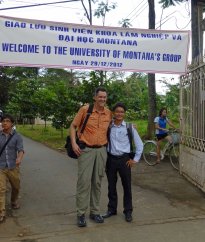 We also talked about the attitudes of people in Vietnam who didn’t participate in the environmental groups.  She highlighted the importance of early education about environmental issues, telling me people who didn’t learn to be concerned about the environment in primary and secondary school weren’t going to suddenly develop an interest when they got to college.  Here, as in the US, people have other concerns.  The specific details of the environmental problems we face vary from place to place as do the cultures that shape peoples’ motivations, but we share one primary challenge: getting people involved.

I know the students at both universities were excited to meet us and exchange ideas.  The presenter at Nong Lam University thought our visit was so important that she wanted to be able to communicate directly with us and had carefully written out her whole speech in English so she would be able to say everything correctly.

It makes me wonder what more we would have been able to share if we had more time together, either just a few more hours so we didn’t have to squeeze getting to know each other a bit and talking about the environment into the same short period of time or even a few weeks to establish a small amount of shared experience and have the potential for conversations to rise naturally out of that experience.

This entry was posted on January 4, 2013 by University of Montana - Vietnam Study Abroad. It was filed under Vietnam 2013 .