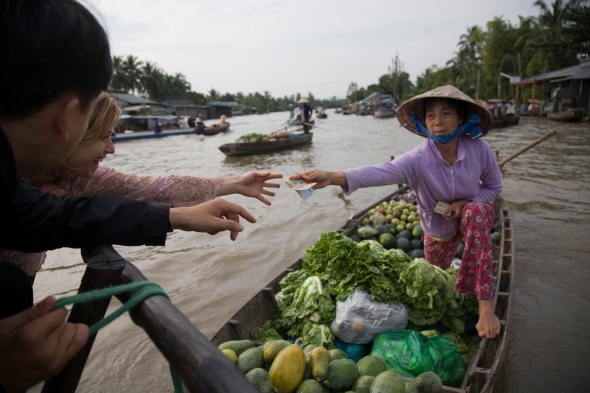 Fruits and vegetables flew from boat to boat along the Can Tho River. Pineapples, watermelon and papaya swayed with the early morning light breeze on poles hoisted ten feet in the air. The sweet, musky smell of flowers and fruit grew stronger as we approached the collection of wooden floating markets. Each boat was fifteen to twenty feet in length, and piled at least four feet high with fresh produce.  It was unlike anything I had ever seen.

“How do you know what they are selling,” I asked our guide, Da, a lecturer on tourism from Can Tho University. “ The pole” he said, “whatever they are selling they tie to the top of the pole, it’s a form of advertisement.” A simple yet effective marketing device used throughout the floating markets that reside in the Mekong Delta.

The first visual that popped into my head was a bumper sticker that is often seen on the streets of Missoula, “Who’s your farmer?” The separation between farmer and consumer in the U.S. has grown so large that it is no longer an issue of concern for most people. If you asked your average American consumer who grew their fruit they would probably tell you Dole, or they simply would have no idea.

During my home stay I asked my host mother, Sau, if she knew where the food her family eats comes from. “Of course,” she said, and proceeded to discuss the matter in detail for roughly twenty minutes. Not only did she know what area it came from, but she also knew the individual farmer who grew them.

Quality control is a big thing in the U.S. and we know that most of our food is inspected before it hits the shelves, but does that truly reflect quality? Americans have little knowledge of what was used in the production process and it is nearly impossible to know the individual farmer who grew them. The difference in Vietnam is evident upon taking your first bite. The fruits have a more distinct flavor and aroma than their American counterparts. They even look slightly different both inside and out. Never have I had a banana so small that tasted so big. Vietnam’s quality of food is second to none.

While America is trying to shorten the gap between farmer and consumer, the Vietnamese are physically shaking hands with the people that grow their food. What is troubling though is Vietnam’s progressing more and more towards the American market system. They are very proud of their developing supermarkets and how many consumers they attract, but at least for now, during my brief stay in Vietnam, I can say that I know who my farmer is.

This entry was posted on January 16, 2011 by University of Montana - Vietnam Study Abroad. It was filed under Vietnam 2011 .