Dancing to the Vietnamese Drum 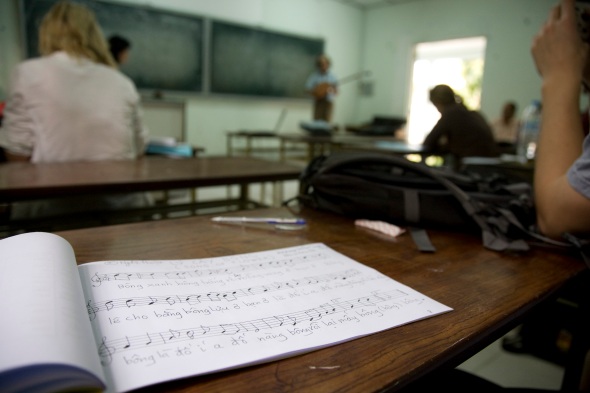 I wish we had the Can Tho University lecture on Vietnamese culture before we went to the discotech.

Just a few hours prior I’d been disgracefully thumping to the music in a Can Tho nightclub, feeling uncomfortably large and sloppy under the illuminating flash of the strobe light (having been earlier informed by an excitable vendor in the open market that they do have “XXL” sizes for me).

Perhaps if I’d already heard what Dr. Le Din Bich was here to tell us about Vietnamese culture, I would have at least had the right moves regardless of the American waist. Or at least I would have known why the locals weren’t rocking out on the dance floor beside us.

Dr. Bich is a wild-haired man with a huge smile who writes so hard he breaks the chalk. And although he speaks Vietnamese, it felt like I could be in any lecture hall with him at the University of Montana—with a few exceptions. While Dr. Bich passionately disintegrated his writing tools, a lizard crawled across the chalkboard and a bird occasionally fluttered through the back of the open-aired classroom. A friend of the professor’s also sat in the corner of class with his guitar, smoking a cigarette, patiently waiting to perform some local music for us.

It was a Spanish guitar at some point, but it had lived a hard life. The tan wood was weathered and cracked like the skin on its companion’s face. I couldn’t help but notice that the man holding the guitar wore a familiar ear-to-ear smile. It seems like everyone has been smiling at us. The people of Vietnam have been intensely inviting and genuinely warm, and it’s an unfamiliar feeling. 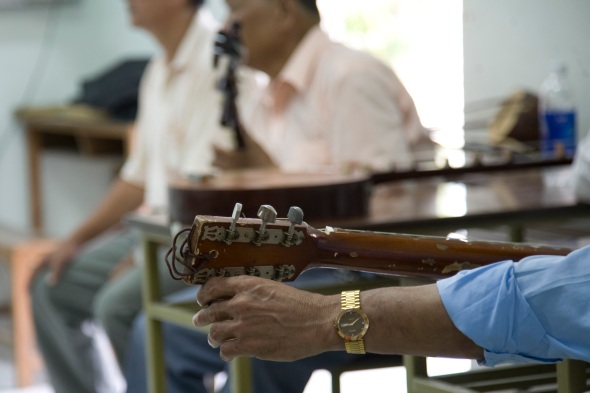 Dr. Bich was here to explain cultural phenomena like unusually welcoming attitudes, but since it is the kind of creed that he abides by, the professor was distracted by his own excitement and immediately broke into song. And so, before our lecture on culture truly began, the smiling men performed their native Mekong delta music. With a few alterations of the frets, the guitar was suitable to strum along with native instrumental counterparts, like my favorite instrument the “frog drum.” There isn’t a word in English for the Mo Ech, a frog-shaped instrument that beautifully croaks as you drag a wooden stick across it, but I quickly fell in love.

The music they played sounds like the environment we came here to study—like water, frogs, and birds. Dr. Bich explained that the songs of the delta regions are like the flow of the river, he said if you listen, you can hear the rhythm of the waves. Some music may be strong, but Mekong music is tender he told us. Like their river is tender. Like their dancing is tender.

My heart sunk in the poetry of his words and the delicacy of the sound. I could hear the waves and see the Mekong in the weathered guitarist’s heart. It is devastating to imagine that these people who have lived through so much and remained so beautiful now face a force that they may not recover from if the world doesn’t help. If the sea swallows the tender land, I wonder if the music would wash away with it.

The Vietnamese are strongly rooted around balance and their climate is experiencing just the opposite. It must be very strange for these people who do not know a yin without a yang to deal with recent changes. They study the values of Confucianism. They are taught to speak quietly, open the door with two hands, to move a chair without dragging it and respect people as well as things.

(Caption: As a Vietnamese cultural experience, UM students tried tropical fruit with red-pepper salt at an exchange with Can Tho University. It is believed that salt balances the sweetness of the fruit fulfilling the yin and the yang.)

No wonder we didn’t fit in on the dance floor. We were culturally awkward. I can’t remember the last time I respected my stage.

It is not surprising that there are words that cannot be translated into our language. There are many things that I see no equivalent to in my Western world. Now I think that if I really want to understand what is going on here, I am going to have to start opening the door with two hands, dancing more gently and balancing the yin with the yang. I only hope that the Mekong can work toward this harmony as well.

This entry was posted on January 7, 2011 by University of Montana - Vietnam Study Abroad. It was filed under Vietnam 2011 .